Another study looking at African DNA has found that they are closer to Chimpanzees than Humans. 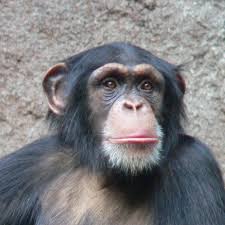 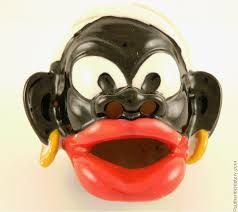 Notice the dark brain dead eyes common in nigroid children while the white child shows alertness and vitality.  This is because blacks are rigged to develop quickly but that comes at a price, their chimp like brains don’t develop as much, they don’t develop ethics or philosophy or higher thinking.  They are empty and do not know what they are missing. So they scream RACISM not understanding that what is in them is RADICALLY different from a high IQ white brain, and the difference between a 160 IQ white brain and the 85 IQ black brain in America is like the difference between a human and a rock.

Human Genetic distance can be measured. Say that Humans are 1.0 on a scale and Chimps are 0.0 on the same scale. If a people measure 0.6 then their genome is closer to Humans than Chimps. Shockingly, two new studies have found that in fact blacks are closer genetically to chimpanzees than humans, scoring less that 0.5 on the scale. This places more strength to the theory that blacks and caucasians diverged over a million years ago and are not relative species. In fact they are better classified as different sub species such as dogs and wolves or chimps and oranguntans.

The more important of the two is Deka et al., Am. J. Human Genetics 56, pgs. 461-474, 1995. This study looks at some genetic markers and compares the genetic distances of eight human populations (Samoans, North Amerindians, South Amerindians, New Guineans, Kachari [Mongolids], Germans, more generalized Caucasians, and Sokoto Negroes from Nigeria [Nigerian sub-Saharan African Negroes]) to each other and to chimpanzees. The data were analyzed two ways – with Nei’s standard genetic distance, and with modified Cavalli-Sforza distance.

[The pro-gnathic jaw of the ape and modern negro is mostly gone in the evolution of the Europanic lower jaw as the entire facial plane shifted its geometry to be more vertically aligned. This change correlates to the change in brain size as the cranial bone structures evolved with less prognathic jaws correlating to the larger brains.]

The farthest were again the South Amerindians (0.712), with the Germans (0.680) and general Caucasians (0.667) being a very close third and fourth behind the South Amerindians as well as Samoans (0.711) and North Amerindians (0.697). So, while the two methods give slightly different orders, in both cases the Nigerians are by far the closest group to the chimps. Once again, given the first method, these sub-Saharan Africans were at 1.334 while all the other groups ranged from 1.527-1.901, and given the second method they were at 0.539 while the other groups ranged from 0.643 (Kachari again) to 0.712. Thus, based on these data, the sub-Saharan African group is genetically closest to chimps. The authors state the following about “neighbor-joining trees” based on these data, using the chimps as the “outgroup”:

“…the SO [Sokoto Nigerian – my note] population is the furthest from all the other human populations.”

Indeed, these genetic data are consistent with the work of J. Irish, reviewed here, demonstrating that sub-Saharan Africans are dentally more similar to extinct and extant apes, and to extinct hominids and australopithecines, than are any other human population. The genetic data and the dental phenotypic data match perfectly.

Some may find it unfortunate that all these data seem to correlate with certain racial stereotypes. However, we must view facts – however harsh – with honesty. And if that includes recognition that certain groups may be slightly more distant from chimps than are Whites, so be it. Of course, White groups have “on their side” the verdict of history as to their accomplishments compared to other groups;

the European extended phenotype is second to none. However, we can imagine that other less accomplished groups may find these data very unsettling. That is unfortunate; nonetheless, it does not change the facts.

These data – however you crunch the numbers, and however liberals may cry that it is all being “misinterpreted” – are quite fascinating and shed important light on questions of racial differences, racial realities, and the consequences of racial miscegenation. It also points out that determining sub-Saharan African admixture (as well as other admixture) via established technology (here, and here) is of significant importance to us.

Brain size places blacks squarely between modern humans (Homo Sapiens Sapiens) and early human descendants. What is amazing is leftist Steven Jay Gould, in his book “The Mismeasure of Man” actually faked his data to try to disprove this.

In a 1981 book, “The Mismeasure of Man,” the paleontologist Stephen Jay Gould asserted that Morton, believing that brain size was a measure of intelligence, had subconsciously manipulated the brain volumes of European, Asian and African skulls to favor his bias that Europeans had larger brains and Africans smaller ones.

But now physical anthropologists at the University of Pennsylvania, which owns Morton’s collection, have remeasured the skulls, and in an article that does little to burnish Dr. Gould’s reputation as a scholar, they conclude that almost every detail of his analysis is wrong.

“Our results resolve this historical controversy, demonstrating that Morton did not manipulate his data to support his preconceptions, contra Gould,” they write in the current PLoS Biology.

Morton’s brain studies that blacks had inferior smaller and more dim witted brains, both in size and in amount of convolution now stands as undisputed FACT. Photos of black vs. europanic brains make this quite clear the difference.

[Black brain vs. Europanic brain. Note the difference in folds and complexity. Gould was wrong, the larger size of Europanic craniums holds up to this day.]

Brain size does correlate with IQ and we see it in study after study as well as standardized tests around the world. Even when you qualify for same levels of income, the difference remains. It is not Nuture, it is Nature.  This also means the trillions we are wasting to try to improve black education is a complete failure. Programs like Head Start where they try to teach black children how to behave and tie their shoes should be canceled immediately.

Take a look now at the most important part of this IQ chart. The numbers of those with 130+ IQ. That is the level required to INNOVATE and bring society forward. Blacks don’t have it. There’s a reason all the sewage systems in Africa fell to ruin after the Europeans left. It’s “white mojo” and studying is “acting white”.  Blacks are incapable.  In Africa, a staggering 300 million people lack adequate sanitation and clean water.  Raw sewage runs into streams and into water sources.

The other paper that I would like to mention (briefly) is that of Kimmel et al., Genetics 143, pgs. 549-555, 1996. Here eight human populations – including Caucasians, Mongolids, and sub-Saharan Africans- were studied to determine their relative genetic distances. The only real surprise here (not a surprise is that Germans and Nigerians are again very distant, and that various Caucasian groups, including the Germans, are close together) is the (relatively large) genetic distance between the Chinese and Japanese, which some uninformed folks may view as virtually “identical.” . The distance between those two East Asian groups (using relative measurements different than that of the Deka et al. work) was 0.029.

That is a full 72.5% of the distance (0.040) between Germans and the Bhramins (Asian Indians) of Uttar Pradesh, and is even 8.5% of the German-Nigerian distance (0.342). Not all East Asians are identical, although other data (e.g., Nei and Roychoudhury’s classic 1993 paper) do show a relatively close Japanese-Korean relationship. Different areas of China may show different distances to other Asian groups as well, of course. In any case, the stated intention of future ABD tests to distinguish between Chinese and Japanese origins may indeed be possible, given the Kimmel et al. data.

Now some will argue that humans cannot mate with chimps and produce offspring while whites often mate with blacks and can conceive. Well often if they are Europeans and Africans they have trouble conceiving. Only certain European women have been able to easily have children with Africans – Heidi Klum being one example.

Also, they do find african human / chimp babies still born all across africa. Thank good they don’t survive because they do look quite grotesque.  Europanics cannot mate with apes and produce anything. But blacks can, and some do survive and try to fit in with the backwards cultures.

There is also the case of the discovery of “Azzo Basso” a missing link ape-human hybrid found in Africa, one of the few cases to live to adulthood. Proving it is possible.

Note: True caucasian crime is 50-70% lower than stated because police departments under pressure routinely classify Mexicans and Hispanics as “white” when they are clearly not.

If we now consider the genetic evidence, the biological structural evidence in teeth, skull suture, brain sulcus and size, IQ, behavioural and proclivity towards crime, we must conclude a different sub species. The out of AFrica theory is a lie designed to push black culture. The reality is that Homo Sapiens Sapiens has been around for over a million years and did not evolve in africa. What did evolve there is a different species that broke away a million years ago. Not our kin, not our brethren, and diverting our resources to aid their population growth is a massive catastrophic mistake.  That must end and we must re-claim our rightful position as the high IQ productive society.  Either we will exclude them to their homelands, or like India, Egypt [see March of the Titans], and countless other once existent advanced societies, we will be removed from history.

Some cases in point. Akbar, the grandfather of the Mugul who built the famous Taj Mahal was white. 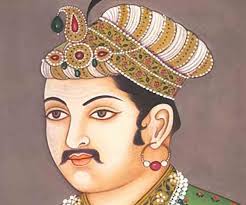 But look at Indians today:

Same for Egypt: Historical Egyptians who built the pyramids:

Hominini Gorillini Africanus is not us, and we are not them. Their genetic lineage is from the Hominini not the Homo line, crossed with the Gorillini line. They are a breakaway species which ocurred after Homo Erectus but BEFORE Homo Sapiens. Whether or not they belong in the Homo group is debatable. One could strongly argue that they are better classified Homini than Homo to make it clear they are a earlier ancestor.

If we are to survive, and reach the stars, we will not do it with welfare payments, handouts, affirmative action, and entitlements to put a mediocre sub species in the position to reproduce like rabbits while our own people struggle resource starved.

It is time to recognize the obvious.  Or we can turn into a disgusting pit like India.

56 thoughts on “Blacks Related Closer to Chimps Than Humans? Really?”