Claude Juncker – evil Lichtenstein dictator and Donald Franciszek Tusk – evil inner council of death member for the EU, both unelected tyrants, struck back at Trump’s pull of out the Paris Accord screaming “Arrrr The light turn off the light! (sorry) Trump we will destroy you. You have no idea the power of the dark side”

“There will be no trade NO TRADE for America EVER!” screamed Juncker as crowds of pointy shrouded masked demons raised goblets of fire. “Never” repeated the EU minions.

The Paris trade deal would have forced America to shut down its power plants and pay hundreds of billions of dollars to other countries as penance for producing gas which is good for plants and trees.

It was the ultimate fuck you to America and Obama loved it. Now the science shows there is no global warming, the scientists faked the data, and that CO2 is actually in dire need around the planet to help plants grow.

Now it seems to plot thickens as the pair is to meet with China and go forward without the US. Well it’s easy for China they have ZERO REQUIREMENTS to reduce pollution, REAL DISGUSTING POLLUTION , not just harmless CO2, and ZERO requirements to pay money into the plan. 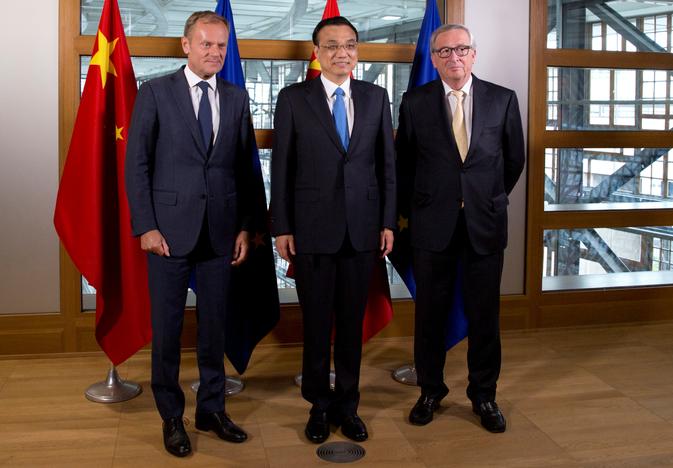 “China will stand by its responsibilities on climate change,” he told reporters after meeting German Chancellor Angela Merkel and before flying on to Brussels.

In a statement backed by all 28 EU states, the European Union and China will commit to full implementation of the Paris Climate Agreement, EU and Chinese officials said.

The joint statement, the first between the China and the EU, commits to cutting back on fossil fuels, developing more green technology and helping raise $100 billion a year by 2020 to help poorer countries cut their emissions.

Ha! We’ll believe it when we see it. China is a hopeless polluter with some days in beijing looking like a smokey whorehouse on the lower east side. Is the EU now going to step up and pitch in the 100 Billion needed to create a global army? Doubtful. Doubtful.

“Yes YES we will help fund you. And we promise to cut our emissions by the year 2030!” Laughed Chinese minister Qing