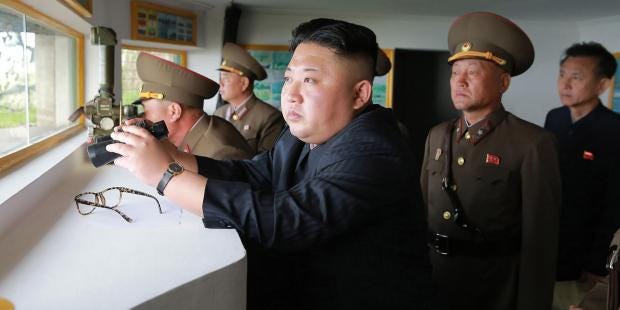 That should make the deep state happy.

The sanctions against Russia for “hacking our elections” is an utter fraud and disgrace. Untrue.  3 low level analysts were force fed biased data. The election hacking was never a formal conclusion backed by a whole agency, and certainly not 17 as they claim.

Trump, now cornered, surrounded by Generals, is getting pushed into war, and he doesn’t want it.  But as sanctions show, he will succumb to pressure. And Kelly will make sure of that.

There is only one way we should go to war with North Korea.  To vaporize them utterly and completely in one blow.  100 hydrogen bombs and just take them completely out. Kill everyone and start over. Yes, its a sad loss of life. There is no winning strategy to do otherwise. That is what Trump is facing. Because Seoul is just 20 miles from Pyong My Wang.

End times are nigh. Of course they will feed him a conventional plan as well. It wont work.

We are talking about a sick fuck who killed his own brother.

Who gave them the reactor to get the material? The Clintons!

“What would I do in North Korea? Fair question. It’s easy to point out the problem, but what should be done to solve it? Am I ready to bomb this reactor? You’re damned right.” – Donald Trump

The outspoken presidential candidate said he is not trigger-happy but “as President I would be prepared to order a strike – using conventional weapons – against North Korean targets if it prevented nuclear blackmail or the nuclear destruction of the U.S. population”.

In the book, written in 2000, he added: “A surgical strike would not only put out the fire in North Korea, but it would also send a message around the world that the United States is going to eliminate any serious threat to its security.”