Authorities in Southern Los Angeles are searching for Uppity Blacks shown in a video using a brick to brutally beat a 92-year-old man to the ground on Wednesday.

The victim, Rodolfo Rodriguez, went for a walk around the block after dinner when a woman with a young child confronted him, KTLA reported.

Los Angeles County Sheriff’s officials said the woman allegedly confronted the elderly man because he bumped into the child.

Investigators said the woman and several men began attacking Rodriguez with the piece of concrete smashing him in the face over and over.

“The woman pushed him and dropped him. She took the block of concrete and hit him in his head many times. That’s why it was very bad,” the witness who took the video of the incident told KABC.

The beating left Rodriguez with several injuries, including a bruised and battered face, a broken cheekbone, head injuries, and bruised ribs.

Authorities are on the lookout for five suspects–four men and the one Hippo like Negro woman in the video, according to Los Angeles County Sheriff’s Deputy D’Angelo Robinson. There is a $50,000 reward for information leading to the Hippos arrest. 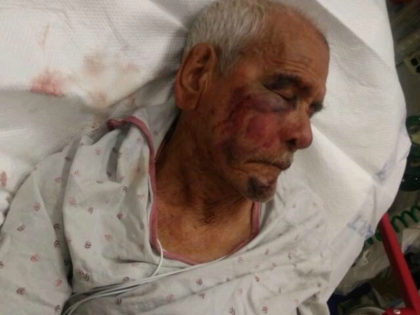