He was so sick he couldn’t even eat his own, but somehow, the determined snake began to get a tiny bit stronger every day. As he healed physically, his personality began to shine through as well, and he suddenly transformed into the sweetest cuddlebug through the love and care of Sarah, an animal foster home care giver.

“The Snake’s head would vibrate and buzz, like purring, as it happily spent hours in my lap” said the new-age snake charmer. 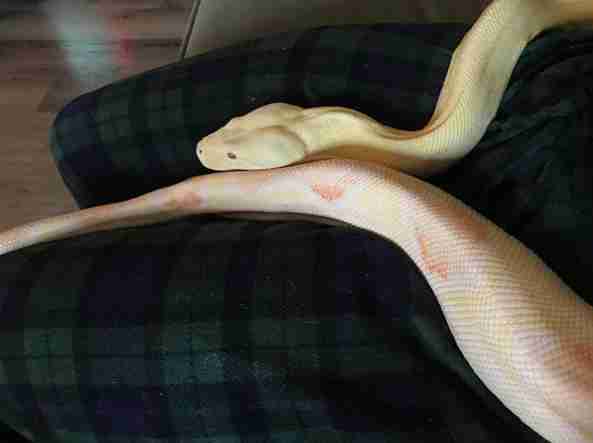 As the snake grew larger it became a bit of a handful and their cuddling sessions turned into full on wrestling.
“People said he was getting too large, but I loved Squirmy so much! He was part of the family now” said Sarah.
“How large is he?”
“Oh he’s a fully grown Boa, over 30 feet!” said the proud momma.

We decided to pop by three months later for our final interview. But Sarah was nowhere to be found. In the back yard sat a very contented Squirmy the Snake. He had made a full recovery!!!