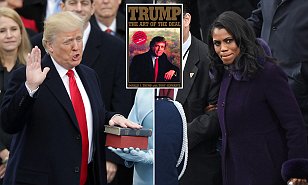 “They were everywhere” said Omaroso sobbing. “Half Chimp Half Weasel hairless monsters. They traveled through the ventilation shafts and underground corridors that were secretly put in when the white house was rebuilt in the 1830s.”

“Half Chimps?” we asked

She plays the tape as we listen intently. The voice of Trump is clearly heard “These tax cuts will go down in history as the greatest boon to the middle class…”

“No No it was another tape, he’s destroyed it. One of his half chimps broke in and ate it” shrieked the disturbed woman.

WE’ll keep you posted. What will Omaroso come up with this week? Next? Only god knows.