Christine Hallquist is the M2F transsexual who just won the vermont Governor primary. It’s a bit deal and it should be a trans triumph. But wait a second.

There’s just a lot that bothers me. The first part is what a coward they are. They got married, had kids, got wealthy, waited until they had gone so far in male life only then to have the courage to transition. And at that age, the effects of estrogen will be minimal. they already lost a lot of their hair for example, it’s not coming back. So Christine wears a wig. 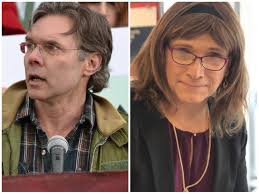 And this the media loves. They show how “to conform” hallquist must now get into fashion, curl her eyebrows, wear a wig, wear silly doo dads of jewelry, because this is what being a woman is. What a joke. I don’t ascribe to that at all!

Julia Serrano called this the media promoting the tragic transitioner and she’s not far off.

Get the obligatory nose job and boob implants. Cause that’s what a woman is. It’s pretty ridiculous because someone at their age desperately needs FFS but will probably never get it, because to be a woman you just put on a wig, lipstick and boobs. It’s really quite ridiculous. 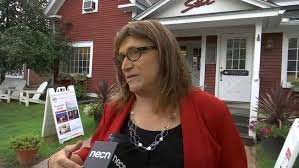 And what about that male moose voice. Nope not the slightest bit effort. Do they “pass”. Nope not in the least. Still, congrats to them for their bravery when it finally came, and to take on such a in the limelight spot.

It really does peeve me off that people wait until their 40s and 50s to transition. and it peeves me off that the “freaks” are portrayed because they didn’t transition properly, but NEVER the beautiful successes. [ no i dont  mean to imply that Christine is in any way a freak. ]

Worse, people think THIS IS WHAT being trans is, and that can lead to violence and hate towards trans people. It’s a lie. Check out Lynn Conways Transsexual Womans Success site to see what normal Trans people look like and accomplish.

Am I ready for a trans governor? Of course. But why can’t it be a feminine pretty one?

Serrano writes that they ALWAYS focus on the clothes and makeups in these documentaries in her book Whipping Girl. trans-fascimilation (viewing or portraying transsexuals as merely imitating, emulating or impersonating cissexual female or male genders Well 20 years later she’s still right.

I had the same feeling with that kardashian olympian.  Jenner argued she did it for the kids. In the end it’s complicated. But really, it’s just a bit odd that people wait so long, then look a bit tragic, sound moose voiced, and then THAT becomes the standard of what people think of as trans, because the ones who pass are invisible. That’s the problem here.