American retirement age is 67. Yet the communists get to retire at 55 (if you are a woman) or 57 (for men). Wait what the hell!

Yes it’s true. Communists work less and retire earlier than Western nations. Now Putin is trying to make Russia more like capitalist countries with later retirements, and the people are protesting in the streets.

Putin offered to cut the proposed retirement age for women to 60, from a retirement age of 63 first proposed by the government. Russian women currently retire at 55. Putin said that the proposal to raise the pension age for men from 60 to 65 would remain unchanged 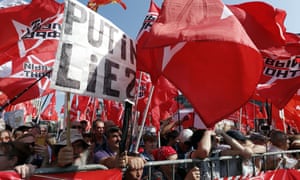 Japan’s retirement age was recently raised from 60 to 62.  Still five years earlier than the USA and they live 10 years longer there!

And in the middle east, retirement age is 55, if you count sitting for 2 hours a day making deals work.

What about a western modern country with good retirement ages? Look no further than Austria. They live 10 years longer than Americans do, yet retire 5 years earlier! (7 years earlier if you are female!)

What about Hungary? They don’t let the Africanized gened rapists in. So they have more money! What is their retirement age?

Hmm. suddenly the USA isn’t looking so great.  Surely a socialist country like France has a later retirement age than the USA?

Nope! the USA pays for their defense so they have lotsa cash for early retirements for EVERBODY! The women have to work longer than the men there, how pussied out are their men! answer – very!

And in Brussels where the EU is headquartered, living off of Americas 1 Trillion a year defense dollars, what do you think? Guess.