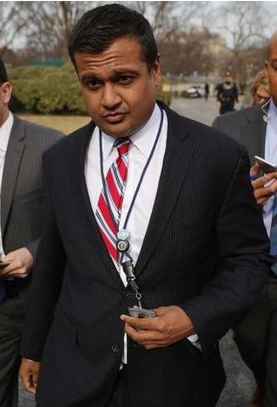 The senior communications official has a record of contempt for the President. A month before Trump was elected in 2016, Shah reveled in the release of the Access Hollywood tapes. “I’m kinda enjoying this, some justice. I honestly don’t think it’s the worst thing he’s done but he somehow got passes for the other acts,” Shah texted an RNC staffer at the time. “Trump is a deplorable.” [White House official called Trump a “Deplorable,” by Olivia Nuzzi, New York Magazine, February 5, 2018]. And well before those tapes leaked, Shah favored the utterly appalling Jeb Bush during the primaries and may have even helped craft an attack ad against Trump.  [Report: White House Spokesman Called Trump a “Deplorable,” by Molly Olmstead, Slate, February 6, 2018]

This information has been public for months. But it has had no negative career impact on Shah. Indeed, he might be looking at a promotion, as he’s a top contender to replace White House Press Secretary Sarah Sanders if she departs. [Trump advisers quietly begin thinking about ‘life after Sarah,’ by Andrew Restuccia and Nancy Cook, Politico, July 23, 2018]

Another factor: overseeing personnel is reported Trump critic and long-time Establishment hack John Destefano. Trump supporters like Mike Cernovich frequently single out Destefano’s role in ensuring no Trumpists got jobs in the administration. The low number of Trumpists and high number of Never Trumpers lends much credence to this accusation.

Indeed, it is rumored that no applicants who applied to GreatAgain.Gov, the website set up for Trump supporters to apply for administration jobs, were given a position. [Trump Supporters Need Not Apply: GreatAgain.gov, by Dr. Jane Ruby, Medium, August 31, 2017]