Another caravan of over 3,000 from Honduras has just crossed into Guatemala.  Remember what happened to the last caravan? They were detained, put in shelters, then RELEASED DUE TO OVERCROWDING. RELEASED. That is the Trump policy. RELEASED. When no one is looking – RELEASED INTO AMEIRCA.

The real culprit here is Mexico. We ALREADY pay Mexico bribe money to stop invaders. But they look the other way. They will set up a toll on a bridge, but ignore five thousand migrants wading through the waters below them. That is reality.

So we need to immediately suspend all aid TO MEXICO. And tell them, we will resume aid when the 3,000 from Honduras are pushed back to Honduras. Not before. But Mexico will never block them because it also has fallen to socialism.

Our response at the border needs to be swift. Big trucks should drive them for many bumpy hours to the port of Houston, where they will be loaded on bumpy ferries and with minimal food and water taken IMMEDIATELY BACK TO HONDURAS. NO ASYLUM CLAIMS. NADA.

Will it happen? Of course not. America has to fall. America has to become low IQ brown people so the communists can take over and steal the wealth and live like fat Clinton piggies.  So more brown people. Until we all die. NOTHING LESS.  At some point patriots will have to secure the borders if the united states fails to. But this “take them to detention centers then release them into America” makes it hard to fight. That is traitorous and we are at war. And the punishment for traitors during times of war is hanging.

Furthermore, I would remind you that even if we WANTED to take in the entire world’s degenerates, we simply do not have enough water. Yes water.  Look at Lake mead. If it goes any lower all of Las Vegas will die.

“We’re going to drop in on Donald Trump. He has to take us in,” said 24-year-old Andrea Fernandez, who left Honduras with a newborn baby, a 5-year-old daughter and 7-year-old son because she said she could not find work and feared for their safety.

The caravan’s attempt to seek asylum in the United States will spotlight President Trump’s hardline immigration stance right ahead of midterms – as images of sobbing mothers and their malnourished children are sure to dominate headlines, should the group make it to the southern US border.

President Trump on Tuesday threatened to cut off roughly $175 million in annual aid to Honduras if their government doesn’t stop the caravan’s progression.

“The United States has strongly informed the President of Honduras that if the large Caravan of people heading to the U.S. is not stopped and brought back to Honduras, no more money or aid will be given to Honduras, effective immediately!” tweeted Trump.

The United States has strongly informed the President of Honduras that if the large Caravan of people heading to the U.S. is not stopped and brought back to Honduras, no more money or aid will be given to Honduras, effective immediately!

Vice President Mike Pence called on presidents in the region to control the migrants, offering economic help and development in return.

Meanwhile, the US Embassy in Honduras said in a Sunday statement “We are seriously concerned about the caravan of migrants traveling north from Honduras, with false promises of entering the United States by those who seek to exploit their compatriots.” 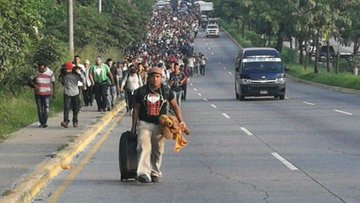 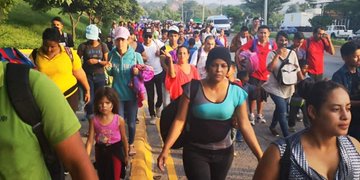 Guatemala says that they have not promoted or endorsed any “irregular migration,” while many have noted the potentially political timing of the new caravan: 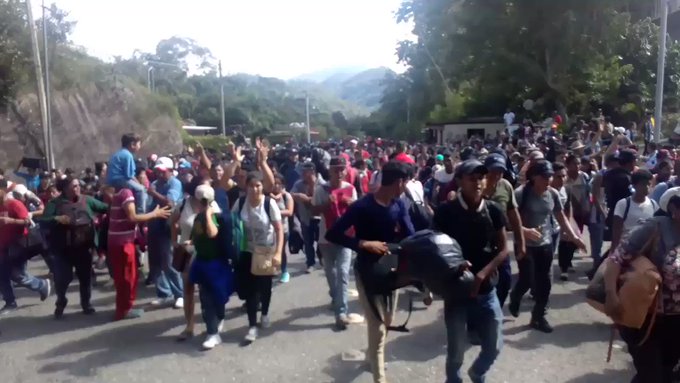 An estimated 2,500 migrants from Honduras are traveling in a group intent on crossing the US Border. Guatemala was supposed to stop them but backed down. Interesting that this is happening again right before the Midterm elections…