I’ve been at it again kind meese of the patriot.

Digging, researching, untoming. And questioning, how did we get to Santa Claus.

In the first part, I retell the story of the true st. Nikolas and his purchase of three whores. But it goes deeper. Much deeper. So here I present to you the second part of how Santa Claus got his bag of toys.

It began in Rome thousands of years before Christ. At the very beginning of Rome there were the group of Sabines. In fact, Rome is said to have been founded upon the event of the rape of the Sabine women.

Who were the Sabines?

Step 1 To Christmas – the Festival to Invite the women.

The Rape occurred in the early history of Rome, shortly after its founding by Romulus and his mostly male followers. Seeking wives in order to establish families, the Romans negotiated unsuccessfully with the Sabines, who populated the surrounding area. The Sabines feared the emergence of a rival society and refused to allow their women to marry the Romans. Consequently, the Romans planned to abduct Sabine women during a festival of Neptune Equester. They planned and announced a marvelous festival to attract people from all nearby towns. According to Livy, many people from Rome’s neighboring towns attended, including folk from the Caeninenses, Crustumini, and Antemnates, and many of the Sabines. At the festival, Romulus gave a signal, at which the Romans grabbed the Sabine women and fought off the Sabine men. The indignant abductees were soon implored by Romulus to accept Roman husbands.

So basically, it was a lot of MEN traveling ALONE without women, who then settled and needed wives to form a community?

What does that remind us of? SWEDEN! The Negroid AFrican and Middle Eastern men, traveling by the millions into all white nations, and then raping the women.

Unlike the Swedish pussy-men, The Caenineses fought back and brought an army to Rome. But they were defeated. Thus giving Romulus women stock to have babies and launch the birth of the Roman Empire.

Which brings us to …

A Sabine goddess of healthy physical development, of making strenuous,1 the counterpart of the Roman Salus. She is also connected with the custom of exchanging presents (strenae) and good wishes on the first of January.2 Some of the actual presents still exist: a cup with the inscription “Anno novo faustum felix tibi”;3 a lamp with the same.4 Coins also were given, and a gold coin was the best of omens in Ovid’s time:5 the poorer client brought a copper coin, and, to represent the gold, a gilded date.6

An old sanctuary of Strenia stood in the vicinity of the Colosseum, where the Via Sacra began.7

So at the very beginning of Rome, at the beginning of the Via Sacra, was Strenia. Thousands of years before christ the Romans had the tradition of exchanging presents. This culminated in the Saturnalia. 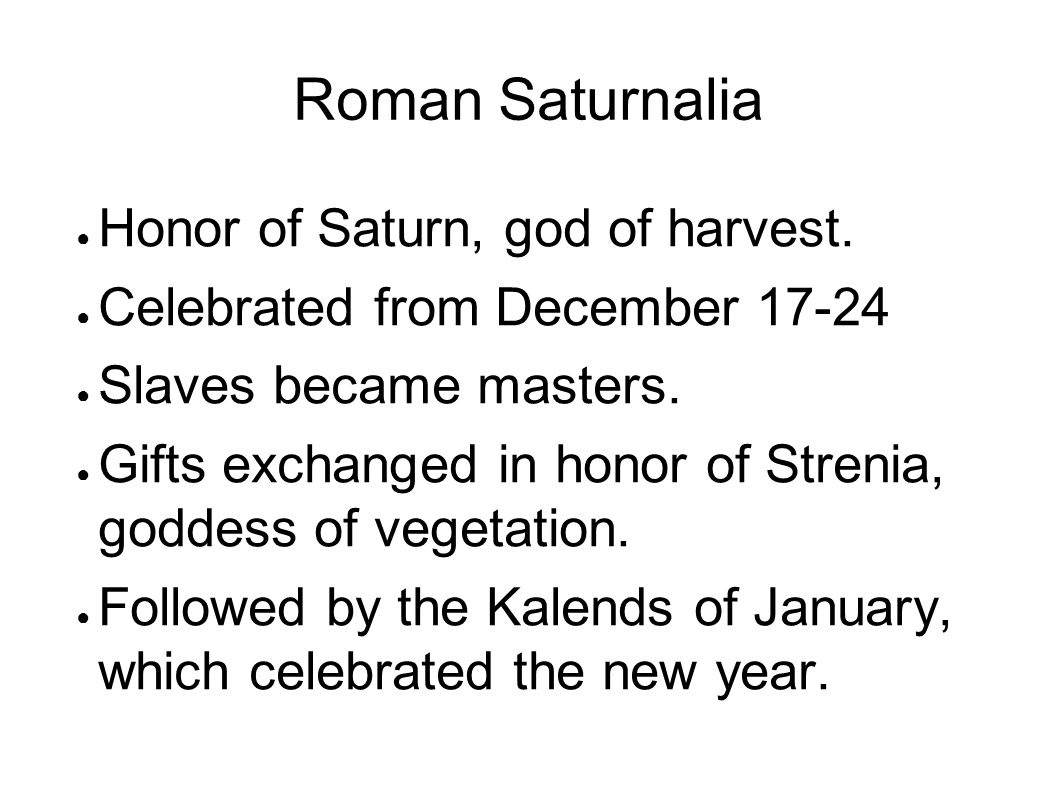 Step 3. Enter the flying and going down Chimneys

Three Befane with their brooms

In Italian folklore, Befana (pronounced [beˈfaːna]) is an old woman who delivers gifts to children throughout Italy on Epiphany Eve (the night of January 5) in a similar way to St Nicholas or Santa Claus.

A popular belief is that her name derives from the Feast of Epiphany (Italian: Festa dell’Epifania. Epifania is a Latin word with Greek origins meaning “manifestation (of the divinity).”[2][3] Some suggest that Befana is descended from the Sabine/Roman goddess named Strenia.[4]

In popular folklore Befana visits all the children of Italy on the eve of the Feast of the Epiphany to fill their socks with candy and presents if they are good, or a lump of coal or dark candy if they are bad. In many poorer parts of Italy and in particular rural Sicily, a stick in a stocking was placed instead of coal. Being a good housekeeper, many say she will sweep the floor before she leaves. To some the sweeping meant the sweeping away of the problems of the year. The child’s family typically leaves a small glass of wine and a plate with a few morsels of food, often regional or local, for the Befana.[3]

She is usually portrayed as a hag riding a broomstick through the air wearing a black shawl and is covered in soot because she enters the children’s houses through the chimney.

Starting in Medieval times around the year 1100ad, French nuns would gather FOOD for the hungry and deliver it on St. Nicholas day – December 6th.  And sometimes sweets and pastries would also be given.

Step 5: Bring it all together

The Roman traditions of Befana, flying and going down chimneys and delivering presents, spread out with the fall of Rome and the rise of the early christian Church brough us St. Nikolas in the Eastern Church. And BOTH these legends COMBINED in what was to become GERMANY.

The Germans brought their tradition of bringing in a Tree to celebrate their winter festivals. The custom was developed in medieval Livonia (present-day Estonia and Latvia), and in early modern Germany where Protestant Germans brought decorated trees into their homes.[2][3] It acquired popularity beyond the Lutheran areas of Germany[2][4] and the Baltic countries during the second half of the 19th century, at first among the upper classes.

The Polish brought us the notion of decorating the tree.

In Poland there was an old pagan custom of suspending a branch of fir, spruce or pine called Podłaźniczka from the ceiling. An alternative to this was mistletoe. The branches were decorated with apples, nuts, cookies, colored paper, stars made of straw, ribbons and colored wafers. Some people believed that the tree had magical powers that were linked with harvesting and success in the next year.

Thus the three ingredients of Christmas were brought together in Germany, and then brought to America by Germans.  The Christmas Tree, laying of presents, going down the chimney, and the old hag women witches were replaced with the nicer symbol of St. Nick or as we know him today – Santa Claus.

Early in 1087, three ships with sailors and merchants from Bari stopped in Myra on their way home from Antioch. When they visited Nicholas’ tomb, the monks showed them where the manna was extracted. You see for centuries the priests had been drinking the decaying juices oozing out of the body of St. Nicholas! GROSS!

The sailors then asked where the saint’s body lay. The monks, perhaps naively, showed them. But the monks became suspicious and questioned the visitors about their intentions, “Surely you do not intend to take the saint’s remains to your own region? If so, we won’t allow it.” However, in the end the Barians prevailed and broke open the tomb with an iron bar. The sailors spirited the bones away to the ship, escaping just ahead of the townspeople coming in hot pursuit.

The men of Bari sailed away on the long voyage back to the southeast coast of Italy. Before getting there, they stopped at a nearby port to make a beautiful box (casket) to hold the saint’s relics. When they arrived in Bari, May 9, 1087, the townspeople thronged to the harbor to welcome the saint’s remains. The returning men made a solemn vow to build a magnificent church to honor St. Nicholas.

The crypt was completed by October 1089 and Pope Urban II laid the relics of St. Nicholas beneath the crypt’s altar, consecrating a shrine that became one of medieval Europe’s great pilgrimage centers. The main church was built in ten years, but it wasn’t until the middle of the 12th century that the imposing and majestic Basilica di San Nicola was complete. It is a particularly fine example of Romanesque architecture and served as a prototype for many other churches and cathedrals.

Putting into context with our modern world…

The people of Myra begged Bishop Nicholas to ask the emperor for relief from the high taxes which were causing much hardship. Nicholas went to plead their cause with Constantine. The emperor granted a large reduction, giving Nicholas a copy of the order. The bishop immediately put the document into effect, but in his great wisdom, after showing it to the leadership, he threw it into the seas so it could NEVER be modified.

Meanwhile Constantine, whose finance ministers had convinced him that this lost revenue would seriously harm the royal treasury, summoned Nicholas to return the document for revision. Nicholas reported that the order was already in effect in Myra. Doubting this, Constantine sent a runner to determine the truth. When Nicholas’ words were confirmed the emperor allowed the reduction to stand. A century later Myra still enjoyed low taxation which the people attributed to St. Nicholas.

So for one day a year, we pretend we are free from them and celebrate our traditions.  Sadly the reality is we have lost everything this nation was founded on.

We no longer have the right to our own income

We no longer have freedom of speech

So maybe on Christmas let’s remember everything we have LOST and be determined to regain them. If we must tear this country ASUNDER to accomplish it, so be it.

But for now, let’s remember the huge path through our WHITE WESTERN HISTORY that came together to create Christmas, and international affair which shows the power of maintaining separate nations and cultures and yet the cross pollination of ideas. That is the power of our borders and nation states.  We should remember Christmas as both of these strengths, and not give in to the extinction of our culture through the rape of our people by the negro invaders much like the rape of the sabine women.

Let’s remember the TRUE st. Nick stood AGAINST government and taxation, decried the abuse of power and freed 3 innocents who were destined for death. And let us not forget that his body had to be STOLEN AWAY because the MUSLIMS had taken over Constantinople and Myra and that we had lost HALF OUR MODERN WORLD to MUSLIM INVASION.

Why don’t we teach our kids the REAL VALUABLE LESSONS of St. Nicholas? Remember his day is DECEMBRE 6, not the 25th.