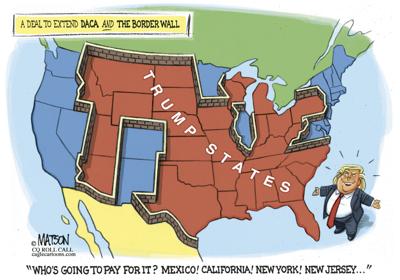 Trumps talk missed the key message. The Demothugs seek to REPLACE all Europanic Americans with low IQ savage races. Pakistani, Bangladeshi, African, etc. This is what’s really going on, it’s what at the heart of it all.

The “caravans”? Those are the replacers. We… are the being replaced.

Trump should declare a national emergency, shift funds out of the Pentagon, build his wall, open the government and charge Democrats with finding excuses not to secure our border because they have a demographic and ideological interest in changing the face of the nation.

For the larger the share of the U.S. population that requires welfare, the greater the need for more social workers, and the more voters there will be to vote to further grow the liberal welfare state.

The Democratic Party is hostile to white men, because the smaller the share of the U.S. population that white men become, the sooner that Democrats inherit the national estate.

The only way to greater “diversity,” the golden calf of the Democratic Party, is to increase the number of women, African-Americans, Asians and Hispanics, and thereby reduce the number of white men.