It’s a sad tale that women who have waited too long to settle down are finding themselves faced with. More and more women are having goblin children, a gift from the Goblin King who keeps the real child. Downs Syndrome babies are on the rise as more and more women seek to start a family after age 35.

Colton was diagnosed with Tricuspid Artesia with a hypolastic right ventricle, an unbalanced AV canal, tetrology of fallot, a cleft mitral valve & an aberrant right subclavian artery. Basically, his heart could not be repaired. He could never have a “whole” heart. Instead, he would be considered for the Fontan surgeries – A series of surgeries that reconstruct the heart to function better. Having a single ventricle heart defect & Down Syndrome made his case even more rare & complex because the majority of the (small amount) of research on the combined two had unfavorable surgical outcomes & high post op mortality rates.

This human minion unfortunately died after tens of thousands of dollars in multiple heart surgeries. 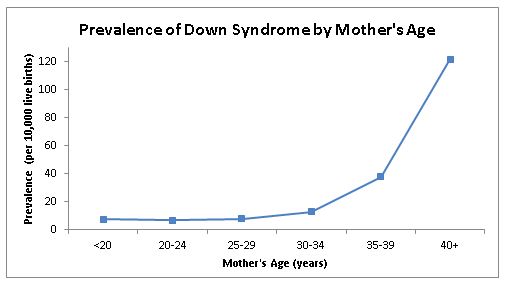 As this chart shows, the prevalence of goblin children after the age of 34 increases dramatically. and by 40 it is TWELVE TIMES more common.

So as long as women continue to start families later and later we will have to get used to goblin children and accept them as a normal part of our society.

Down’s syndrome individuals face low IQ and often cannot take care of themselves, requiring great cost from taxpayers to raise them for their entire lives. Can our dysgenic path get any worse?  Or do they enrich us with their special goblin hearts? Only time will tell.

As Frank Stevens told the cuck-cuk-cuk-mittee, he is no research scientist but he knows about life with down’s syndrome.

Remember true love doesn’t count chromosomes. It’s a goblin lesson we all can live by.