Skip to content
Date: March 3, 2019Author: FromTheEditorsDesk 0 Comments
Update: Dems push for Amnesty for the Sudanese and Somalians here on temporary status since 1997

House Democrats have introduced legislation that would provide deportation protection and a pathway to citizenship for DACA recipients, those with TPS, and those with Deferred Enforced Departure (DED), which gives immigrants from Liberia legal status

“Being an American should never be temporary,” Rep. Sylvia Garcia (D-TX) said. “We need to make sure that we give them permanent protection, and that it is a pathway to American citizenship.”

“Not just for them, but the entire family,” Garcia said.

TPS was created under the Immigration and Nationality Act of 1990 (INA) introduced by the late Sen. Ted Kennedy (D-MA) and signed into law by President George H.W. Bush. It has acted as a sort of quasi-amnesty used by foreign nationals who would otherwise be in the country illegally, and shields individuals from deportation back to countries which have suffered through war, famine or natural disasters.

The program, which was originally set to expire in July 1992, has been renewed by every administration since.

Why are we giving sanctuary to Haitians who BEHEADED the french men who took care of them and their country fell into shit. Let them live in the bed they made.

It makes no goddamn sense and Trump is a TRAITOR to support this nonsense. He is a liar cheat shill call him what you will. Why o Trump are you letting these scammers stay here forever? WHY!

Department of Homeland Security (DHS) secretary Kirstjen Nielsen not only puts the Trump administration in compliance with a preliminary injunction on the initial decision to cancel the TPS program, but goes further by covering hundreds of thousands of nationals from Sudan, Haiti, Nicaragua and El Salvador through January 2020.

Sundanese and Nicaraguan nationals have been living in the country on extended TPS since 1997 and 1998 respectively, while El Salvadorians have been covered by TPS since approximately 2001. Haitians have had TPS since 2010 or so. 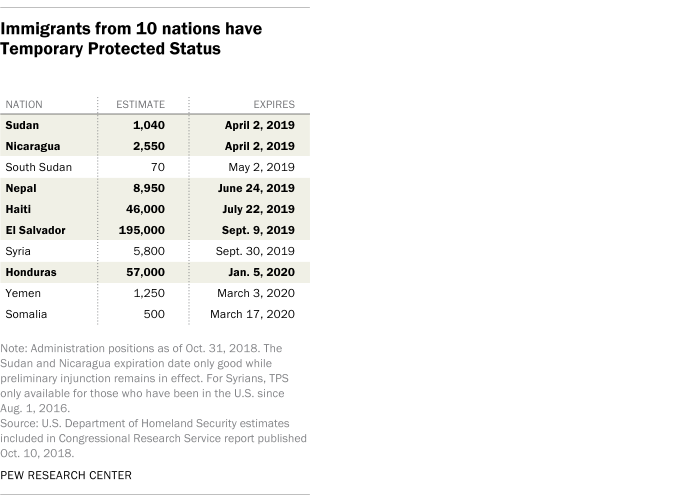 DHS will announce whether they will also renew the status of other foreign nationals covered under TPS set to expire in 2020, including people from Honduras, Yemen and Somalia.