“Apes are people too. We pay for the metro with our taxes. Why are we being charged then hounded if we don’t pay to use it? And of course, it’s disproportionately brown and black people being hounded and arrested,” a protester who only gave her name as Brandy told CBS.

“That’s Cause Only dem Negros don’ pay for sheelt” said another.

The MTA said the protests on the city’s sometimes-dangerous subways were nothing more than an added cost to the public.

“This demonstration activity follows the dangerous pattern of previous activities that have resulted in vandalization and defacement of MTA property – clearly violating laws. Those actions divert valuable time, money and resources away from investments in transit services that get New Yorkers to their jobs, schools, doctors and other places they need to go,” said MTA Chief Security Officer Patrick Warren, according to The Guardian.

“The MTA has zero-tolerance for any actions that threaten the safety of the public and our employees, and impede service for millions of customers. We are monitoring conditions as we cooperate with the NYPD and MTA PD to maintain service while ensuring everyone’s safety.”

The protest was orchestrated by protesters who oppose the current $2.75 fare and the increase in police announced after a spike in crime on the subways.

“There’s so much in the budget that can cover free transportation instead of more police. I don’t understand why it’s going that way instead of the other way,” protester Sydney Daniels told CBS.

Some commuters were not sympathetic. 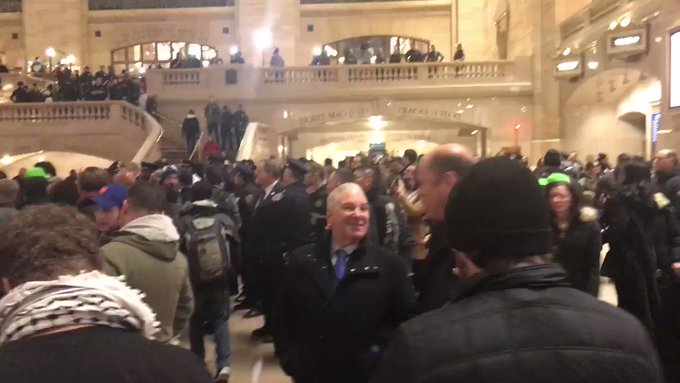 Doing some call and response chants. “How do you spell racist?” “NYPD” and “From the A to the Z” “Public transit should be free” – cops looking on.