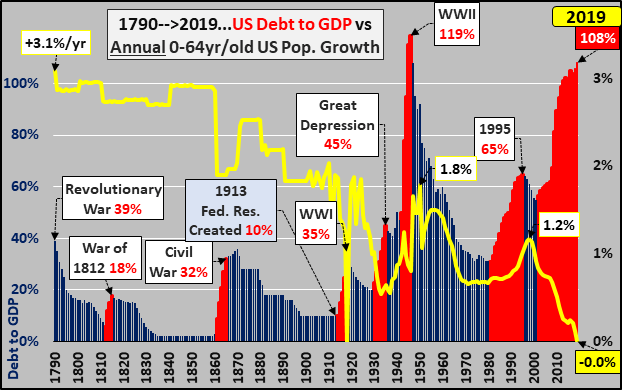 Is it DEBT that is stopping Americans from having babies … or is it insane divorce courts raping our men? Whites have stopped having children altogether. Fear not, they do not include the 10 million who sneak into our country every year illegally.

It’s a vicious cycle. That pizza I could get for a cheap $2.50 meal is now $4.00. That’s a price that’s nearly doubled in just ten years. On average, if you consider more real measures of inflation (see shadowstats) our currency is losing at least 50% of its value every decade. The dumb pidgeon middle class sees 401k accounts and their home values going up and thinks it’s a good thing. No it’s part of a lethal cycle. It ends in more poverty and fewer productive people able to have children. Its those on welfare who have the security to make babies not our best and brightest.

Career salaries have also changed dramatically over the past 20 years. Doctors, Lawyers, and Engineers used to make about the same. Now doctors and big business lawyers routinely earn over $400,000 a year. They are hedged against inflation. Doctors through government payola and insurance companies which hide fees that would normally make us vomit if paid directly. Lawyers do better as they are parasites off the Fatcat corporations which feed on us. College bureaucrats used to make a trifling, now 800,000 salaries aren’t uncommon. Janet Reno got over a million a year.

But more and more, as our investments yield turn to 1 or 2% retirement accounts for municipalities which give all their workers and firemen and police fat retirement packages need to claw the money to pay for that largess from somewhere. So they hit the middle class with ridiculous unaffordable property taxes, often more than 600 a month for modest homes in modest states.

All of this has the effect to burn out the middle class. IT’s a tired people more and more feeling forgotten. Trumps rev to the economy just began to lift people up when the virus struck.

Looking at the annual US population growth, the deceleration from 1790 to present isn’t hard to see, but the sharp collapse in growth due to influenza at the end of WWI takes a little closer look.  However, after the influenza was contained by 1920’ish, the under 65 year-old growth rate immediately recovered to trend growth before continuing its deceleration.

The rationale for the continued declining fertility rates and births appears to be the continued growth of federal debt well in advance of economic activity.  The mounting $23+ trillion in federal debt (and quadruple that in unfunded liabilities) will never be repaid and can’t honestly be serviced at anything but Federal Reserve dictated minimal interest rates.

Thus, the Fed continues to rig the interest rates, which rigs stocks and commodities…and the outcome is unnaturally high asset appreciation…which rewards elderly and institutional asset holders and punishes young, poor, and those absent assets.  Young and poor are suffering from costs of living rising far faster than incomes.

Marriage are being put off and the undertaking of childrearing is a choice that can simply be avoided with widely available birth control.  Simply put, it is the Federal Reserve coping mechanisms that are causing record low fertility rates as young adults are financially unable/unwilling to undertake children.  The Fed is preserving the present for the elderly and institutions at the expense of the young and poor present and future.