China deliberately lied about the human to human transmission of the virus, allowed Wuhan citizens to fly all around the world to seed the virus in other countries. This is an act of work. It was deliberate.

Now a recent article from Germany shows their incredible anger at China.

It’s time for the G7 to meet to strip China from the World stage, Remove it from the WTO, BAR all trade with China, AND seize all foreign holdings and that includes disabling all foreign purchased treasury bills (one trillion dollars worth).

Only this STRONGEST rebuke of China will correctly put them in their place. If not, they just keep laughing and laughing as they take over the West.

Reichelt said that, “You rule by surveillance. You wouldn’t be president without surveillance. You monitor everything, every citizen, but you refuse to monitor the diseased wet markets in your country. You shut down every newspaper and website that is critical of your rule, but not the stalls where bat soup is sold. You are not only monitoring your people, you are endangering them – and with them, the rest of the world.”

He continued with his bill of particulars, noting that “surveillance is a denial of freedom. And a nation that is not free, is not creative. A nation that is not innovative, does not invent anything. This is why you have made your country the world champion in intellectual property theft.

“China enriches itself with the inventions of others, instead of inventing on its own,” Reichelt wrote. “The reason China does not innovate and invent is that you don’t let the young people in your country think freely. China’s greatest export hit (that nobody wanted to have, but which has nevertheless gone around the world) is coronavirus.”

We can’t wait to read what Reichelt will have to say when it is confirmed that the “Wu Flu” escaped from the Wuhan Institute of Virology, a development we expect will take place any day.

The best-selling paper Bild calculated prior to Reichelt’s editorial that China owed Germany $161.99 billion for coronavirus damages, triggering the angry response from the Chinese embassy in Berlin. Bild said the compensation amounts to $1939.53 per person if Germany’s GDP drops by 4.2 percent. The Bild article was titled: “What China owes us.” 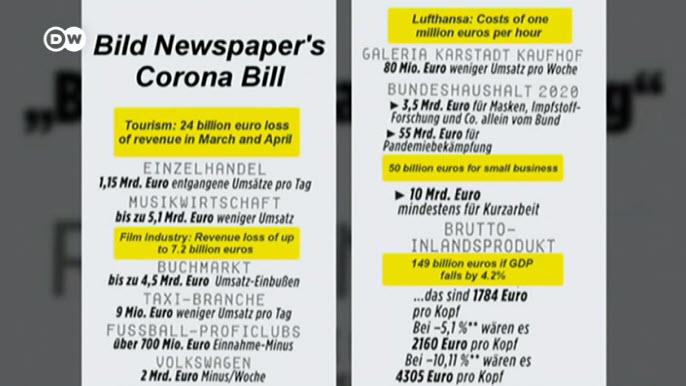 In response, the spokeswoman for China’s embassy, Tao Lil, published an open letter to Bild in German on the embassy’s website stating that, “I followed your reporting on the corona pandemic in general and China’s alleged guilt in particular today. Apart from the fact that we consider it a pretty bad style to blame a country for a pandemic that is affecting the whole world and then to present an explicit account of alleged Chinese debts to Germany, the article ignores some essential facts.”

She added that “We note that many countries now struggling with COVID-19 have had time to prepare for the cross-border spread of the pathogen after China reported its outbreak under IHR [World Health Organization] guidelines.”

And in taking a page out of every liberal textbook, everywhere, having no credible defense, China’s embassy spokeswoman promptly changed subjects and said the article “stirs up xenophobia and nationalism.”

So… accusing a government of a giant cover up – which we already know happened as China itself admitted when it silenced the Wuhan doctor who tried to bring the world’s attention to the plague ravaging his town only to be arrested and forecefully silenced before dying from the coronavirus – is now nothing more than an act of racism. Got it. Perhaps the next time the IRS comes knocking and demanding a “fairer share” of one’s income, the same “you are racist” excuse can be applied as well?

Oh, and yes, the same line of questioning that got this site banned by the “ultra liberal” arbiters of all that is true and just in this world – and direct whose actions may have facilitates the deaths of thousands of people around the globe – was not lost on the Bild editor-in-chief, who cited last week’s Washington Post article reporting that, “your laboratories in Wuhan have been researching coronaviruses in bats, but without maintaining the highest safety standards. Why are your toxic laboratories not as secure as your prisons for political prisoners? Would you like to explain this to the grieving widows, daughters, sons, husbands, parents of corona victims all over the world?”

We couldn’t have said it better ourselves, even if we did say it about 3 months earlier, for which we got the ultimate punishment from that paragon of free speech, Jack Dorsey.